Baylor University Medical Center, part of Baylor Scott & White Health, and Baylor Scott & White All Saints Medical Center – Fort Worth are among a handful of centers in the nation with a dedicated facility and team focused on treating patients with liver and pancreas diseases and cancer. Thousands of patients have received treatment since the Baylor Scott & White Liver and Pancreas Disease Center opened in 1998. The physicians and surgeons on the medical staff have extensive experience with these complex cancers and work closely with nurses and coordinators to develop a personalized care plan for each patient at our liver and pancreas disease centers in Dallas and Fort Worth. 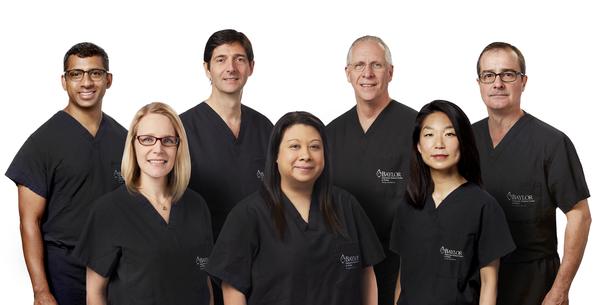 Liver conditions treated in Dallas and Fort Worth:

Treatment options vary depending on the stage of the liver cancer, the tumor’s location and size, and a patient’s overall health.

Liver cancer treatment can include:

In carefully selected patients, resecting (cutting out) the cancer from the liver may be an option. Sometimes the surgeon may perform the operation with several small incisions, either laparoscopically or robotically. Most of the patients receiving these less-invasive approaches will return home in 24 - 48 hours. If traditional, open surgery is required, patients should expect a three- to five-day hospital stay.

If the cancer cannot be cut out, less-invasive procedures for burning away the liver cancer may be performed. Radiofrequency and microwave are two ablative (burning) therapies. With ablative therapy, a needle is placed into or around the cancer, and heat is used to treat the cancer. This technique saves more of the surrounding liver tissue. Patients usually return home the same day after having an ablation to treat liver cancer.

Additional options for patients with difficult to reach cancers or for patients who are not surgical candidates utilize interventional radiologists who specialize in less-invasive procedures including:

In chemoembolization, microscopic glass beads coated in chemotherapy are injected into the blood vessel that supplies the cancer. This delivers a local dose of chemotherapy to the tumor without the side effects associated with traditional chemotherapy. The beads keep the chemotherapy trapped in the cancer instead of circulating in the blood system, and this starves the tumor of its blood supply. Side effects may include nausea, pain and fatigue. Patients generally go home the same day or the next morning after receiving chemoembolization treatment.

Patients with large tumors, multiple tumors in the same region of the liver, and/or tumor within the portal vein (a large vein of the liver) can potentially receive radiation bead therapy. These beads are coated with radiation instead of chemotherapy. This procedure is used after a detailed mapping that determines how much radiation will go through the liver and on to other areas of the body. If the amount of radiation going to the lungs or other areas is too much, radiation bead therapy is not safe to use. If the mapping determines a safe path for the radiation, radiation beads are injected into the blood vessel of the tumor. These radiation coated beads implant into the tumor and work to destroy the cancer cells.

This is a chemotherapy pill that may be used alone or in combination with other treatments. The most common side effects include diarrhea, fatigue, rash, pain or peeling of the palms or soles of the feet.

These other medical options are used as alternatives for those liver cancer patients previously treated with sorafenib.

A liver transplant may be an option for select liver cancer patients who meet strict medical, surgical, social and tumor-size criteria. A very thorough work up is required for potential candidates. Living donor liver transplantation, an operation in which a healthy person donates a portion of his or her liver to the recipient, should be considered for approved candidates. A living donor liver transplant offers organ availability more quickly, which allows the patient to avoid progression of cancer and its life-threatening complications.

These are different terms for the same thing. This technique uses high-dose pinpoint beams of radiation to treat the liver cancer. In some cases, fiducials (small gold ball markers) will be placed into the tumor to accurately identify the targeted area of cancer. Approximately a week later, the patient receives three to five days of radiation treatments. Most patients do not experience the side effects of typical radiation treatments.

High energy beams from positively charged particles, or protons, are used to treat the liver cancer tumor. With proton therapy, larger doses can be applied while sparing surrounding tissue. Some of the common side effects include fatigue, nausea, skin redness, pain and soreness near the treated area. Patients with acute relapsing and chronic pancreatitis may be candidates for total pancreatectomy followed by islet autotransplantation. These patients are evaluated, diagnosed and treated by the dedicated specialists on the medical staff of the Baylor Scott & White Liver and Pancreas Disease Center. Lynette & Amy: How liver cancer led me to liver transplant

After Lynette was diagnosed with cirrhosis due to fatty liver disease, her journey to find an organ donor began. Little did she know, her very own daughter Amy would be the perfect match. With Baylor Scott & White Health by their side, they had successful surgeries and are both better than ever today.